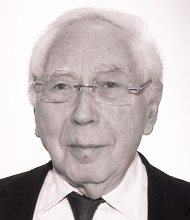 
Charles MEYER shares his vast experience of the world of international business with members of the firm and with his clients.
As partner in the firm of MEYER-VERVA-DUPONT, which he founded in 1965, Charles MEYER has worked extensively in the UK, Israel, Belgium, Turkey, Jordan and Russia, as well as in the People’s Republic of China.

When China first opened its doors to foreign investment Charles MEYER was the first French lawyer to set up a firm in country to assist a number of industrial groups and banks. In this capacity, he acted as Counsel to François Perrigaud, then president of the CNPF employers’ federation, in various negotiations with the Chinese government.

He also took part in a number of symposia on Chinese Law, at the French Senate in particular, with Alain Peyrefitte, under the chairmanship of Senate President Monory, and in Beijing at a conference organised by the French Ambassador, Charles Martin.

In Beijing, he was appointed: